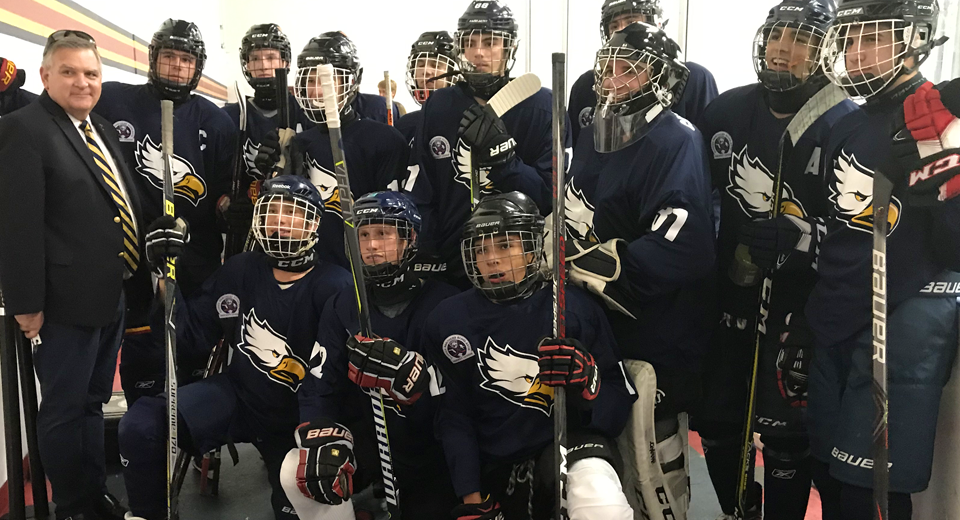 The 14 CCA students on the inaugural team have played ice hockey independently in local scholastic leagues for years, but this season marks their first playing as a pure team.

“It is exciting to see this group of young men unite over the common bond of wanting to represent their school and honor God with their talents,” said Keith Huisman, CCA’s director of athletics.

“There's just something so thrilling about playing for your school and in front of your classmates."

The Eagles took to the ice October 7 for their first game of the season at the Florida Panthers IceDen in Coral Springs where they defeated American Heritage 8-2. CCA’s Head of School Dr. Jason Rachels performed the ceremonial puck drop.

“This was a great first game for the boys,” said Rachels. “It was a solid all-around effort.”

“The boys and I were all anxious about starting off the season on the right foot, but we came out strong and put up a few quick goals only to unleash the flood gates and dominate the rest of the game,” said DeBolt, who scored the Eagles’ first-ever goal. “Having the fans cheering and banging on the glass truly electrified the arena.”

The team was anchored by freshman goalie Ryan Cavalancia who stopped 20 of 22 shots for an average save percentage of 90.9 percent. Assisting the team with its eighth and final goal of the evening was sophomore Stephen Susanj.

“I can't remember the last time I was this excited for a hockey game,” said Susanj. “There's just something so thrilling about playing for your school and in front of your classmates."

Coach Kerrigan — a CCA alumnus from the class of 2014 — was also encouraged by the outcome of the first game.

“The chemistry our boys had despite never having practiced before on the same ice says a lot,” said Kerrigan.

The future looks bright for the Eagles as they hope to build upon the momentum of this inaugural 20-game season.

“We look forward to seeing this club sport grow into a full-fledged athletic program in the near future,” said Dr. Matt Ozolnieks, team manager.

“Having the fans cheering and banging on the glass truly electrified the arena.”

To view this season’s schedule, click here. Admission for all games is free. The CCA Eagles’ next match is tonight, October 18, at 8:10 PM at the Florida Panthers IceDen.

“It is so exciting to have hockey at CCA, and everyone should come out and experience the excitement for themselves,” said DeBolt.

For any questions or inquiries about the CCA ice hockey team, please contact Matthew Ozolnieks at MattO@CCAEagles.org.