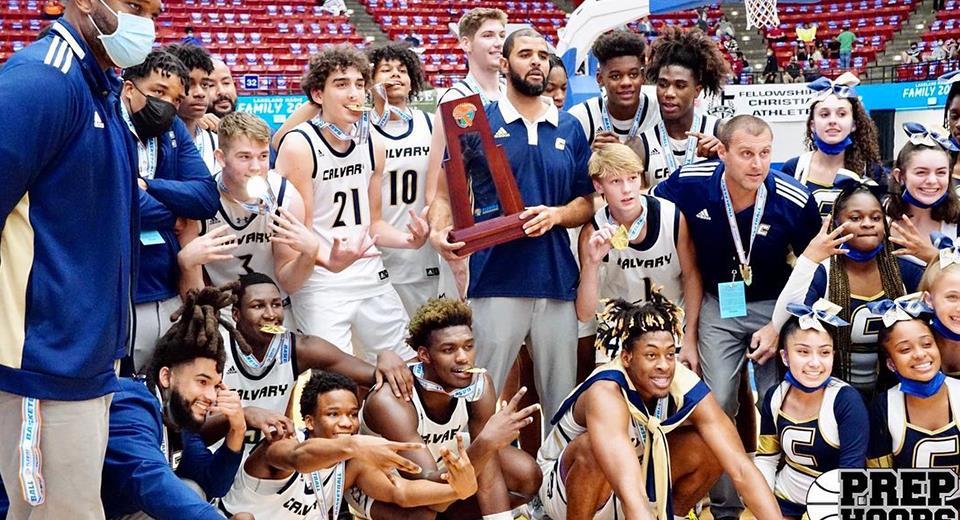 3/8/2021
March 1-6: Hoisting Hardware
Despite facing unique challenges this spring season, Calvary Athletics' student-athletes are not just surviving, but thriving. Learn how our Eagles are excelling in their respective sports — by securing state championship titles, earning top national rankings, and working hard for winning streaks — while growing as godly and resilient men and women of character.
The big news of the week came in the Boys Varsity Basketball team capturing their second state championship in program history. In his tenth season as coach, Cilk McSweeney burst into tears as the final seconds ticked off in the overtime win over Bishop McLaughlin Catholic. “This was the toughest year with everything going on, but we stuck together and we accomplished our goal,” said McSweeney.

The team punched their ticket to the championship by defeating Miami Country Day on Wednesday, March 3 by 18 points. In the championship contest, the Hurricanes of McLaughlin would buffet the Eagles with long-range shooting and lead most of the game. CCA hung close, not letting their opponent expand their lead beyond twelve points. Continual pressure, balanced scoring, and a deeper bench pushed the Hurricanes to the point of exhaustion. Carl Cherenfant tied the game with 3 seconds left, sending the game to overtime. Calvary would pull away quickly and celebrate a nine-point victory.

The Girls Varsity Cheerleaders have had one of the toughest seasons of any Calvary team. The girls battled adversity as opposing school's protocols often did not allow for opposing cheerleaders to attend. The team finally saw consistency as the post-season began and they supported every single playoff game. The girls traveled to Lakeland to support their Eagles basketball team and spend a few days together to bring the season to a close. Kudos to Coach Sasso and the girls for maintaining incredible commitment through a very challenging season.

Calvary's Ice Hockey team had a couple of weeks off but would meet the Storm last Saturday and lose a heartbreaker to the composite team of St. Thomas Aquinas student-athletes. Calvary jumped out early, scoring three goals in the opening period to the Storm's single point. Attila Szathmari netted the first goal, followed by Stephen Susanj and Bobby Chryst. Susanj would score a second time in the next period, but that would be the last goal CCA would manage. The Storm put three goals in during the third and final period to take down the Eagles 5-4.

The Tennis teams did not have any matches this past week, but the boys team is continuing its domination with big wins over Archbishop McCarthy and The King's Academy. The girls continue to strengthen. Both programs see their next matches after the break.

The Girls Varsity Lacrosse Team had the week off as the COVID-19 contact tracing sidelined them. They are off for the spring break week but have 3 big games the next week with North Broward Prep, Pine Crest, and South Plantation on the schedule.

The Boys Varsity Lacrosse team went 2-0 this week with a 14-10 win over West Broward and a 13-3 victory over Westminster Academy. Tyler Asbate and Blayze Rodriguez led the offense in the first game. The defense allowed just three goals for the first three periods. West Broward made a surge in the fourth, but the lead was too much to overcome. In the second game, Carter Combs netted his first career hattrick while Tyler Martinez was a virtual wall in front of the goal for three quarters. The Eagles moved to 3-2 on the season. They travel to Belen Jesuit in Miami on Tuesday, March 9 where they hope to maintain their winning record.

Girls Varsity Softball went 2-1 on the week. The Eagles bats were electric with 34 runs scored on the week. The ladies dropped their game Wednesday to perennial power Palm Beach Gardens High School, but bounced back with run rule wins over Cardinal Gibbons (13-3) and Trinity Christian (15-4). Four different Eagles took the ball in the circle and struckout 18 batters. Seven girls are batting over .400 and the team is batting .358. While the entire Eagles offense caught fire, they were led by Reese Mittauer (4 hits, 5 RBI), Addison Mittauer (3hits, 4 RBI), Braelyn Mittauer (3 hits, 3 RBI), and Alexa Gonzalez (3 hits, 2 RBI).

Boys Varsity Baseball traveled to La Grange, Georgia to compete in their annual invitational. Playing four games in two days, dominance from the mound was backed up by stellar offense. Irv Carter got the better of Walton High School in the pitcher's duel of game one as Calvary would win 3-1. Rene Lastres led the offense with two homers. Erik Blair (Junior, Florida Commit) would get the nod for the evening game against Denmark High. On day two, Calvary punched their ticket to the championship with a 10-0 win over St. Anne-Pacelli HS. Johnny Lane opened the game with a homer. Senior hurler, Andy Painter went five full innings, striking out twelve on just 62 pitches. In the championship game against Smith-Station, CCA jumped out to a 4-0 lead in the championship. Smith-Station would chip away eventually tying the game in the seventh. In the last half-inning, Ty Hollandsworth smacked a one-out double to left field to start things off. Abe Rozenblum walked and Johnny Lane reached on error to load the bases. Alex Ulloa followed in Ty's footsteps with a rope to left field, scoring Hollandsworth and ending the game. Nick Anello did the bulk of the heavy lifting from the mound. Team Captain, Johnny Lane, was named the tournament MVP as the senior tallied seven hits (4 singles, 2 doubles, 1 HR) and two RBI's.

Varsity Track & Field headed to Archbishop McCarthy on Wednesday and both the boys and girls contingents placed second out of five and six teams respectively. Abigail Hamilton scored 18 points for the girls winning the 100 and taking second in the 200. Johanna Velez topped the podium in both the 800 and 1600 events. Kristen Kloman came in second in both events. The two, along with Ava Lorenzo and Neveah Stephen, won the 4x800 relay. Bella del Busto won the 3200 and Kayla Byrd swept both the long and triple jump events. The boys team took advantage of their strengths in the field events. Rocco Casale won the 110 hurdles, and Kennedy Sauder won both the High and Long Jumps. Greg Janvier triple jumped into first. Quinn Katz would win the shot put and take third in the discus, and Jack Garey won the Javelin.