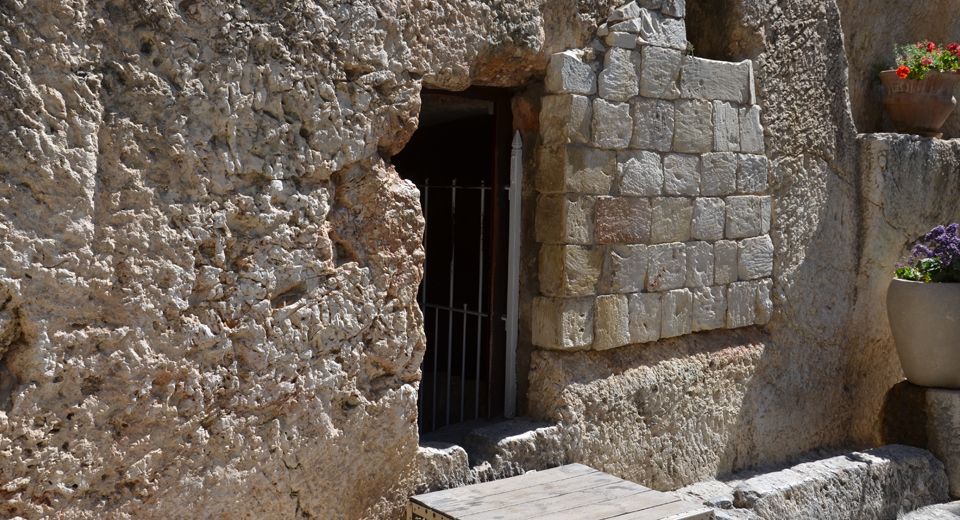 A Picture Worth a Million Words

4/9/2021
By: Pastor Bill Schott
When Mary Magdalene, Simon Peter, and John find Jesus’ tomb empty three days following his crucifixion, they each experience something different and notice different details — details that ultimately point back to the Old Testament and forward to Christ’s Second Coming. This Easter, join Calvary Christian Academy’s Bible Department Head Pastor Bill Schott as he explains how gaining a better understanding of Jewish culture and history can help us see one of the greatest pictures painted in all of Scripture. Get ready to get goosebumps!

Perhaps one of the most iconic pictures associated with the last days of Jesus Christ’s ministry on earth is The Last Supper by Leonardo da Vinci. I think it’s fair to say that people from all over the world from various faith backgrounds would recognize this painting.

I believe there is an even more awe-inspiring picture connected to the Easter story — one that not only points to Christ’s resurrection but to His return as well.

Although this painting is a masterpiece that illustrates Jesus foreshadowing his imminent death through the act of Communion, I believe there is an even more awe-inspiring picture connected to the Easter story — one that not only points to Christ’s resurrection but to His return as well. In fact, it’s one of my favorite pictures in all of Scripture. It gives me goosebumps again and again.

A Picture Within a Picture

In order for the picture of the empty tomb in John 20 to have even greater significance than it already does for Christians, we need to filter it through another picture — one from the Old Testament that would be very familiar to a first-century Jew. That picture is the Tabernacle.

If a detail is given in the Bible, it’s not just there for fluff or to take up space on the page; it’s meant to instruct us and point us to something greater

In Exodus 25, God tells Moses to build the Ark of the Covenant exactly according to His instructions. If a detail is given in the Bible, it’s not just there for fluff or to take up space on the page; it’s meant to instruct us and point us to something greater, which in this case, is heaven. The term that defines this is logographic necessity, which means that every word is necessary.

The Ark of the Covenant, which was inside the Holy of Holies where only the High Priest could enter, was to include two angels made of gold on the lid (also known as the mercy seat) — one at the head and one at the feet of the ark. These angels were meant to serve as two witnesses for the High Priest as he sprinkled the blood of the sacrificial lamb on the mercy seat. This act meant that Israel’s sins were forgiven for another year.

The New Ark of the Covenant

John first sees Jesus’ grave clothes, and what would be on them but His blood, of course. Peter notices Jesus’ face cloth, which was not with the grave clothes, but was folded off to the side by itself. Scripture says when Peter saw the cloth, he “saw and believed,” so there must have been something really significant about that face cloth. More on that later…

Scripture says when Peter saw the cloth, he “saw and believed,” so there must have been something really significant about that face cloth.

Mary stayed outside the tomb weeping. She hurt much because she loved much, and she loved much because she had been forgiven much by Jesus. As she wept, she bent down and looked into the tomb and saw one of the greatest visions a human being has ever seen. She saw two angels, one sitting at the head and one at the feet where Jesus had been lying. In between the angels would be the blood-stained garments John had first noticed — the sprinkled blood of The Lamb. This is the exact picture of the Ark of the Covenant we see in Exodus 25!

This is the exact picture of the Ark of the Covenant we see in Exodus 25!

Now, the glory of this is that only the High Priest of Israel saw what Mary was looking at, and he only saw it once a year. There was now a new Ark of the Covenant, and that changed everything.

Jesus had turned what was once the most defiled place for a Jew — the tomb — into the most holy place. It literally became the Holy of Holies because His body was in there. And Mary, who was considered the most defiled person of the New Testament due to her being possessed by seven demons, ends up becoming a model of the new priesthood because only a High Priest had seen the vision she saw and lived.

In the Old Testament, the High Priest would atone for Israel’s sins on Yom Kippur, the Day of Atonement. When he would go into the Holy of Holies to sprinkle the blood on the Ark of the Covenant in between the two angels, he would have bells on the hem of his garment and a rope tied to his ankle just in case he did anything wrong and died in God’s presence.

you can’t be in God’s presence and live without atonement.

So the only way Israel knew for sure that their sins were forgiven was if the priest came out alive. So what’s the evidence that my sins and your sins are forgiven? Jesus walking out of the tomb alive!

Not only did He conquer death, but He tore the temple veil that separated us from God (Matthew 27:51) so we could have a relationship with and direct access to the Father. Jesus’ revolutionary resurrection altered the course of humanity. And yet, His story doesn’t end there.

Not an Ordinary Napkin

In Jewish tradition, if a Jewish man had a servant in his home and the master got up while eating dinner, the servant would wait to see what the master would do with his napkin.

If the master threw his napkin over his plate, that meant he was done with his meal, and the servant would proceed to remove the plate. But if the master folded the napkin and put it to the side, it meant that the master was coming back.

But if the master folded the napkin and put it to the side, it meant that the master was coming back.

John 20:7 states that the napkin that had been placed around Jesus' head was “not lying with the linen cloths, but folded together in a place by itself.” This is what Peter saw that made him believe. He probably understood that the Master was coming back. Cue the goosebumps!

This is what Peter saw that made him believe.

If you'd like to learn more about the Master’s return, Pastor Schott teaches a class Wednesday nights on the book of Revelation. Visit CalvaryFTL.org/Revelation to watch the class recordings on YouTube.