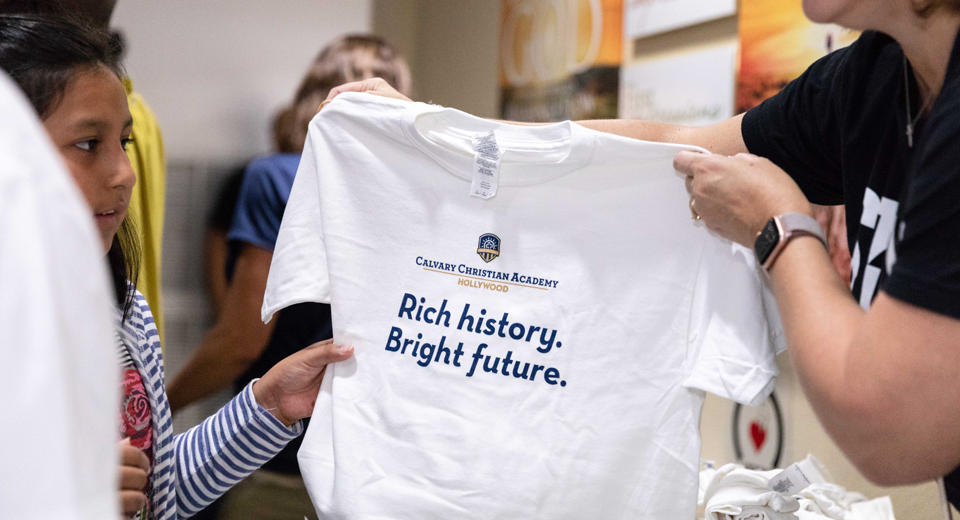 7/16/2021
The search is over! We are excited to announce who will be leading CCA Hollywood’s Middle and High School families as the new Upper School Principal and Assistant Principal. These educators come to CCAH with 30 years of combined experience in both public and private education. Read this article to find out who will be serving in these roles as well as their vision for CCAH’s growing community.
In May of this year, the Calvary Christian Academy community learned that CCA Hollywood’s Upper School Principal, Joshua Neal, was being called into a new season of ministry.

Once his resignation was announced, CCA’s leadership team began a search for a replacement who would build upon Mr. Neal’s legacy and lead CCA Hollywood through an exciting season of growth while also honoring the school’s rich history.

CCA’s leadership team began a search for a replacement who would build upon Mr. Neal’s legacy

During this process, it was decided that CCAH would also introduce a new Assistant Principal position to help lead the development of programs for 6th-12th grade students.

After much prayer and discussion, we are excited to share that the following educators are thrilled to have the opportunity to serve CCAH families in their new roles:

Chris Mitchell received his first educational assignment as a Broward County Public School mathematics teacher at Silver Lakes Middle. After his first year of teaching at this magnet school, he led other teachers as a mathematics department chair for five years.

Following this role, Mr. Mitchell transitioned to Pompano Beach Middle School where he served as the mathematics coach/department chair, athletic director, interim assistant principal, and co-led a club that served minority, male students. While at Pompano Beach Middle, he earned a Master’s of Education degree in Educational Leadership from the American College of Education.

He has led student small groups for the Bahamas and Mexico mission trips, planned and executed large events, and successfully guided parents and students through challenging situations.

Although Mr. Mitchell enjoyed the fruitful ministry opportunities that were provided for him in the public school system, he eventually felt God calling him to serve at Calvary Christian Academy.

While at CCA’s Fort Lauderdale campus, Mr. Mitchell further developed as a leader by serving as an assistant administrator for six years — two years in high school and four in middle school. Additionally, he has led student small groups for the Bahamas and Mexico mission trips, planned and executed large events, and successfully guided parents and students through challenging situations.

“I am excited to follow the Lord as I cast vision to serve CCA Hollywood’s Upper School families,”

As CCA Hollywood’s new Upper School Principal, Mr. Mitchell will continue to provide a safe and enriching school experience for all Upper School students. He will also collaborate with teachers and staff to ensure students are reaching their full potential and making academic progress.

“I am excited to follow the Lord as I cast vision to serve CCA Hollywood’s Upper School families,” said Mr. Mitchell. “Through the superior academics, spiritual enrichment and discipleship, and tight-knit community, students in grades 6-12 will be equipped with the tools, opportunities, and confidence to succeed in college and beyond as young women and men of character.”

Mr. Mitchell currently attends Calvary Chapel Fort Lauderdale where he serves as an elder and deacon. In addition to that, Mr. Mitchell loves sports and is an avid pickleball player.

Stefanie Chadee’s longtime passion for education stems from being mentored by great private school educators throughout her upbringing in Trinidad and Tobago. Upon graduating from high school, Ms. Chadee decided to migrate to the United States to pursue her college education. She earned a bachelor’s degree in Psychology with a minor in Spanish from Barry University and continued her studies at BU to obtain her master’s degree in Mental Health and Couples Family Marriage Therapy.

God led Ms. Chadee back to Northwest Christian from 2012 to 2021 where she served in the following roles that not only gave her more experience in the classroom, but also presented her with the opportunity to empower leaders on staff and serve NCA’s families with excellence and care:

“It is an honor to return back to CCA Hollywood’s campus to carry on the legacy of Christian education that has changed lives in our community for 60 years,” said Ms. Chadee. “I look forward to walking alongside our Middle and High School families as we encourage each other to reach for God’s best in all areas of our lives.”

“I look forward to walking alongside our Middle and High School families as we encourage each other to reach for God’s best in all areas of our lives.”

Ms. Chadee currently attends Elevate Church in Hialeah and is involved in their life groups. In her spare time, she enjoys fitness, traveling, reading, and proudly serving in the Florida National Guard; we are grateful for her nine years of service to our state!

THE BEST IS YET TO COME

“The CCA Hollywood community is blessed to have this dedicated team of loving Christian leaders who truly care about the spiritual, academic, and social growth of their students,” said Dr. Jason Rachels, President of Calvary Christian Academy. “I am confident they will continually reach for excellence in all they do in order to provide CCAH families with the best Christian education experience.”

If you would like to learn more about the safe and supportive community CCA Hollywood has to offer students in Pre-K through 12th grade, click here to submit an inquiry form!