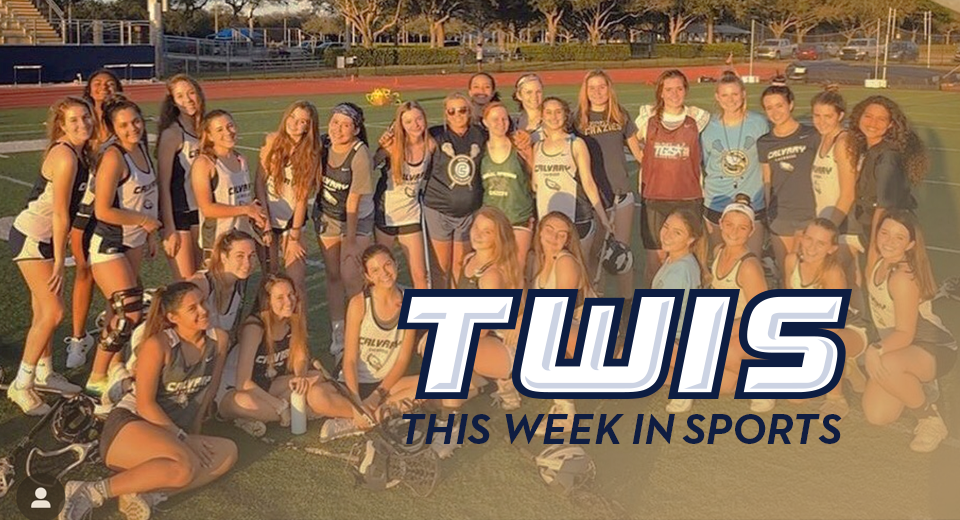 2/24/2020
In the first regular-season week of the spring, Calvary’s spring varsity programs dominated the competition while the last winter team kept their FHSAA State Finals bid alive on the road. Our first look at the girls softball program in action shows incredible promise with two middle school pitchers blowing away the competition. We’re not only proud of our Eagles when they win on the scoreboard, but also when they achieve spiritual victories like our girls lacrosse team did this past Friday night with their opponent; read more in the Lacrosse section! Read More.

The varsity basketball team traveled to Melbourne to face Holy Trinity Episcopal Academy in the FHSAA Class 3A Region 4 quarterfinals. CCA trailed most of the game but took the lead in the last few minutes, defeating the Tigers by eight points (72-64). Scoring leaders include Dylan Canoville (21), Greg Glenn (16), and Noah Tovar (16). The win earns the boys the right to compete in the regional semifinals against Santa Fe Catholic. SFC is the number one team in Class 3A, but the Eagles’ schedule has prepared them for this moment. The game will take place in Lakeland at 7:00 PM this Tuesday, February 25.

The girls varsity softball team opened up their regular season by posting identical scores against Pine Crest and Lake Worth Christian. On Thursday, eighth-grade student Grace Adamonis struck out seven Panthers. Hannah Lamb and Alexis Gonzalez smacked triples en route to an 18-3 victory. The next day, Reese Mittauer (6th grade) took the ball and matched the strike-out number posted by her teammate and fellow middle-schooler. Reese’s cousin, Braelyn, registered the first home run of the season with a laser to the left-centerfield. Combined with her speed, she made it home without a play at the plate. The Eagles would again hang 18 runs on their opponent, the Defenders of Lake Worth Christian. Three juniors are providing excellent leadership while the team of four middle-schoolers, six freshmen, and three sophomores chip in speed and excitement.

Calvary’s girls lacrosse program was supposed to open up their regular season on Tuesday at home, but their opponent had to postpone to support a team member who lost a parent over the weekend. That left the girls opening up on the road in Miami against Ransom Everglades. The Raiders competed for a regional championship last year and lost very little talent. They handed the Eagles a 15-5 loss, but there were bright spots with stellar play from Faith Elwell (9 draw controls), Karla Rivera (defensive leader in ground balls), and Lauren Williams (3 goals, 4 draw controls). Faith Elwell’s effort set a new program record for draw controls.

While losses are difficult to stomach, the ladies continued their tradition established by Coach Kacie Anderson where each player and coach gives hand-written notes of encouragement to their counterparts on the opposing team. They then pray with them and encourage them. While heading back to the bus, two RE players approached the team, thanking them and telling them that their actions encouraged them to be bolder in their faith on the team.

This is what Calvary Athletics is all about!

The boys varsity tennis team took down Archbishop McCarthy 5-2 in the season-opening match. James Germinal, Chris Bogelin, and Juan Moscoso would win their singles bouts. The trio, along with Paul Patulla, would also secure doubles victories. The Mavericks got the best of the Eagles on the girls side of the match. Both teams play their next match today (Monday) against Cardinal Gibbons at the Lauderdale Tennis Club.

The boys varsity lacrosse team made a great first impression in the opening week of regular season play. On Tuesday, CCA hosted Western High School on Calvary Field and dealt the Bulls a 20-6 drubbing. The win was an all-round team victory. Eric Stephenson won 16 of his 24 faceoffs. Jason Thomforde led the team in scoring with seven goals and two assists. The Eagle’s defense registered a perfect clearance rate (16 of 16) in their opening match, and the team doubled up the Bulls in the ground balls category.

On Friday, the team traveled to Jupiter Christian where their stellar offense may have been outdone by their defense. Eric Stephenson again dominated the faceoff while Thomforde chipped in another seven goals. After giving up five first-half goals, the Eagles defense buckled down and allowed only three in the second half. Kevin Clinton owned the crease with a tough-nosed defense in front of him.

The varsity baseball team opened up their season with a 4-0 win over Flanagan High School this past Tuesday. The pitching staff of Andy Painter (4 innings), Jonathan Xuereb (1 inning), and Johnny Lane (2 innings) combined for a no-hitter while newcomer, Kishon Frett, went yard with one on base. The next game would be at Marjory Stoneman Douglas on Thursday night. MSD jumped out to an early lead, hanging three runs in the second inning. At the end of four, Calvary was within reach, trailing 4-3. Douglas expanded their lead to four runs with three outs left for CCA. Calvary would mount a comeback but fall just short, losing to MSD 7-6. The baseball team’s next game takes place this Saturday at home with the JV team playing at 10:00 AM and the varsity team at 1:00 PM.
Back