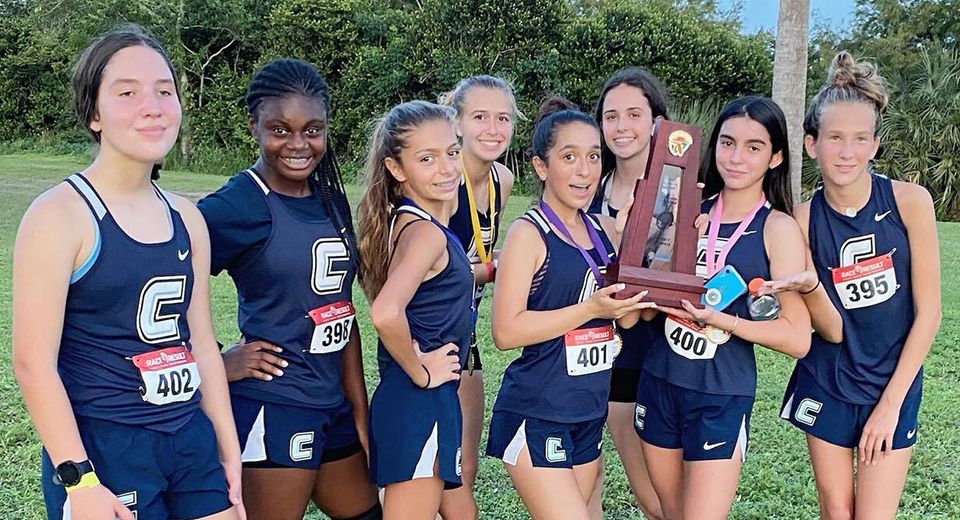 12/4/2020
By: Keith Huisman
CCA Athletics has been blessed with the opportunity to safely resume athletic competition this semester, which has been met with great excitement by our students who have been eager to resume such activities. In this blog post, Athletics Director Keith Huisman discusses our discipleship-focused philosophy for athletics, shares team updates from this semester, and previews what lies ahead for the CCA Eagles on the court and field.
At Calvary Christian Academy, we believe athletics is ultimately a discipleship tool and view winning as a byproduct of a team united under a common goal. CCA’s coaches are not only skilled in the sports they lead, but they also serve as valuable spiritual mentors for our students. They reinforce godly values such as sacrifice, good sportsmanship, humility, respect, and integrity.

In our JV and Varsity teams, parents, players, and coaches all work together to serve each other, their team, and even students, coaches, and parents from opposing teams. The result of such unity along with hard work and dedication has led to great success and learning lessons for our students, which is evident in the team recaps listed below. As of the writing of this article:

Varsity golf ended its season at the regional level. The Eagles were led by Mattox Pincek who shot an 82 at Crandon Park. Thomas Mendez, Patrick Pinkney, Max Gressle, and Sam Koster also represented CCA at regionals. On the girls side, Naia Montes, Brooke and Savannah Jones, and Katie Clawson qualified for regionals as a team. A big thank you to coaches Marty Fanning, Teagan Quinnell, and Erik Most for leading our golf teams this season!

Our volleyball program had a new face this year with Coach Sam Skelton leading the program. The girls started the season with four straight wins but began facing their share of adversity with some key injuries down the stretch. The team, led by junior and Liberty University-commit Taylor Bates, finished as the district runner-up and fell to a tough King’s Academy team at the regional quarterfinals. Seniors Joi Fairweather and Abby Gomez ended successful careers with the Eagles.

CCA’s cheerleading program continues to grow. The girls are working hard, being challenged in the weight room and in their spiritual lives. We added a JV program this year, and there are no signs of it slowing down. Coach Sasso and Muñoz added another coach in Julia Croake. A big thank you to our senior leaders: Kyara Guillaume, Brianna Charles, Abigail Hage, and the always hard-working Daniella Mielke.

“I couldn’t be more proud of the girls we have been blessed with on the team this season. They continue to grow and strive for greatness in everything they do on and off the football field and/ or basketball court,” said Varsity Cheer Coach O’Shaun Sasso. “Being a part of the CCA Cheer team means being able to glorify God with our performances, our character, and actions as well as being an influence within in our school and outside of it.”

“Being a part of the CCA Cheer team means being able to glorify God with our performances, our character, and actions as well as being an influence within in our school and outside of it.”

It was a very unique season for the Swim and Dive team, as both facilities and meets were difficult to come by. Nevertheless, the girls team sent five swimmers to the state championships!

Angelic Hernandez, Mika Darquea Juris, Grace Parnas, and Lydia Lanahan swam together in both the 200 and 400 freestyle relays, finishing 6th in the state in the 200. Angelic also swam the 200 free individually, and Lydia Lanahan swam the 50 and 100 free events. Diver Sophia Souza wrapped up an amazing career for Calvary finishing 5th in the state; she also earned a full scholarship to Boston University.

Diver Sophia Souza wrapped up an amazing career for Calvary finishing 5th in the state; she also earned a full scholarship to Boston University.

CCA’s Cross Country program wrapped up their season last weekend running in the state championships in Tallahassee. These young runners had a great season. The girls ran to a district championship with Isabella Del Busto taking 1st place. Six of the first eight runners to cross the finish line wore navy and gold. Go Eagles!

The boys were the district runner-up. Jonathan Anthony led the Eagles, finishing in 3rd place. At the regional race, the girls qualified for states as the runner-up. With a few injuries to battle, the Eagles finished 14th in the state. This is quite impressive for a team with three of their top runners in middle school, and the other three in ninth and 10th grade.

Our varsity football team ended with a successful 7-1 season. Although November 20th’s game against Chaminade Madonna — three-time defending state champions — did not result in a victory, our boys finished the season with their heads held high with much to be proud of. Nine of their 10 scheduled games were canceled this season due to COVID-19, however, CCA was still able to put together a formidable schedule, which included home games against 3A power Cardinal Newman and 7A Miami American and a trip to 4A power Clewiston.

The Eagles emerged from the regular season undefeated, and in doing so, recorded three shutout victories. The team also traveled to King’s Academy to shut out the Lions on the road to the regional semifinal.

“This squad overcame more adversity than I’ve experienced in 35 years of coaching,” said Head Coach Kirk Hoza. “Our seniors led the team with courage, toughness, and great faith. In the process, they set a standard future classes can aspire to attain.”

The boys soccer program is 1-2 with a big win over Chaminade Madonna. The girls program is 0-1-2 under first-year head coach Greg Geissenger. The girls team already logged an exciting finish as they netted a goal with seconds left to tie the game with Westminster Academy.

Our girls basketball program won both of their preseason games prior to Thanksgiving break, and our boys varsity basketball team, which rivals our 2017 State Championship team, has hit the ground running.

We have been truly blessed with the opportunity to safely resume athletic competition during this time when so many youth programs have been suspended due to COVID-19. Students have expressed how happy they are to be back on the field, court, turf, and water doing what they love most with their teammates and friends. I look forward to seeing them continue to glorify God through competition.

Keith Huisman is the Athletics Director at Calvary Christian Academy. He has served as athletic director in Christian Education for 13 years. He and his wife, Adrienne, attend Calvary Chapel Fort Lauderdale along with their four children.
Back
Date Posted
No comments have been posted