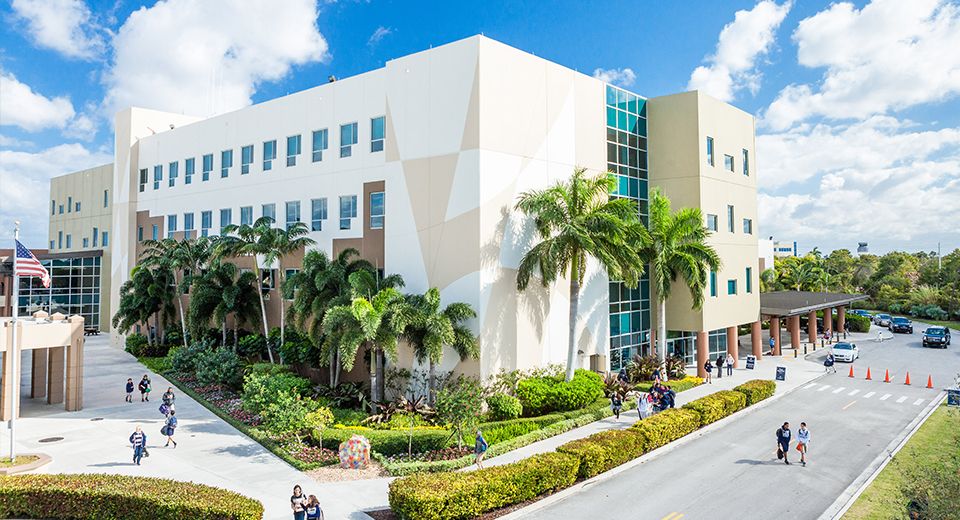 12/7/2020
Calvary Christian Academy
COVID hasn’t stopped Calvary Christian Academy leaders from continuing to dream and plan for what God has in store for the school’s future. In order to increase opportunities for development and innovation while we continue to cultivate a healthy culture in a school of our size and scope of academic and extracurricular offerings, we have restructured our leadership team hierarchy. Read this blog post to learn about the new positions that have been created, who has been chosen to fill these roles, and which leaders will be transitioning into other new positions. The best is yet to come!
Over 20 years ago when leaders were dreaming and planning to open a Christian school called Calvary Christian Academy, never did they envision it becoming the largest Christian school in the state and one of the largest in the nation. But leave it to God to do beyond what we can think or imagine!

Now that He has led CCA to this point and given us this opportunity to grow significantly, we have been blessed to be in a position in which we can attract a team of faculty and staff who are not only at the top of their respective fields, but also dedicated to co-laboring with parents in the discipleship of their children.

In an effort to ensure that they are receiving the best possible learning experience that challenges them spiritually, academically, and socially, the school has taken great strides to invest in and empower great leaders who truly have a heart for and robust understanding of CCA’s school community.

leave it to God to do beyond what we can think or imagine!

“Over the years, we have been able to raise up these tried-and-true leaders through our school’s leadership pipeline, and in turn, God has worked through them to take their respective teams and this ministry as a whole to the next level,” said Head of School Dr. Jason Rachels. “As we continue to strive to be good stewards and cultivate a healthy culture in a school of our size and scope of academic and extracurricular offerings, we believe this can best be achieved with a restructuring of our leadership team hierarchy.”

Serving as CCA’s new Head of Lower School will be Joe Wilson, current Middle School Principal, and our current High School Principal Aaron Mills will be taking on the role of Head of Upper School. Both Joe and Aaron started at CCA as teachers, later became assistant principals, then principals.

“In their new roles, they’ll continue to support and develop their leadership teams as well as have the opportunity to use their experience, wisdom, and giftings to further CCA’s mission through strategic planning, advancement, and continued innovation. The added support will in turn allow our principals to more fully focus on shepherding and discipling their students and staff while being more readily available for daily needs,” said Dr. Rachels.

“COVID-19 may have slowed down much of our society, understandably so, but it won’t stop CCA from carrying out the work God has called us to do . . .” –Dr. Rachels

With the introduction of these two new positions come more exciting transitions for other individuals as well beginning June 1. CCA’s current Head of School Dr. Jason Rachels will be transitioning to President of CCA’s Fort Lauderdale and Hollywood campuses. Mr. Wilson and Mr. Mills stepping into their new roles will give Dr. Rachels the opportunity to support the broader community and vision of teaching and training disciples to change our world.

“All these appointments have been preceded by much prayerful consideration, deliberation, and counsel from our executive team, advisory council, and governing board. I am thankful for their many years of service to our ministry and am confident that our families will be blessed by their experience, commitment to CCA’s mission, and professional promise,” said Dr. Rachels.

Brian has worked in the field of education for 17 years, and this is his 10th year serving at CCA. During his time here, he has taught High School math, served as a High School Administrator, and was selected to serve as a High School Assistant Principal in 2016. Brian holds a B.A. in Secondary Education from Western Michigan University and an M.S. in Educational Leadership from Purdue University. Brian is also a gifted singer, serving on Calvary Chapel Fort Lauderdale’s worship team and as the Director of Ocean’s Edge School of Worship back in 2015. He also has a heart for missions and has played an active role planning CCA’s 11th grade mission trip to Mexico. He even met his wife of 14 years, Eryn, while on a mission trip when they were teenagers! Their children — Levi (7th grade), Kennedy (6th grade), and Harper (3rd grade) — are all CCA Eagles as well.

Favorite Bible Verse:
“... But those who hope in the Lord will renew their strength. They will soar on wings like eagles; they will run and not grow weary, they will walk and not be faint.” —Isaiah 40:31

Penny has served in administration at CCA for the past 10 years, including the past six years as the Middle School Assistant Principal. She has tremendous experience in education that spans 32 years and includes many different roles, responsibilities, and lives that have been impacted. She holds a master’s degree in Educational Leadership from Florida Atlantic University. Penny's strongest attribute is her care for people and desire to see students reach their God-given potential in Christ. Penny and Jeff, her husband of 47 years, raised their two children in Christian education and now have two grandchildren at CCA. Penny is a true Floridian, born and raised in Fort Lauderdale, which explains her love for fishing, boating, and family fun in the sun!

Nikki enters her new role with 17 years of educational experience under her belt. She has worked at CCA for six years, having taught second, fourth, and fifth grades, serving as a Team Lead for four years, and as an Assistant Administrator beginning this school year. During her time here, she has designed our fourth-grade curriculum for science and social studies and led the ACSI Spelling Bee and Math Olympics for Elementary. Nikki holds a B.A. in Psychology from University of Central Florida and an M.A. in Christian Education from Southwestern Baptist Theological Seminary. Outside of school, she loves cooking and spending time with Andre, her husband of 17 years, her five children — two of which are high school students at CCA — and her newborn granddaughter Zara.

Favorite Bible Verse:
“Be strong and courageous. Do not be afraid or terrified because of them, for the LORD your God goes with you; he will never leave you nor forsake you.” –Deuteronomy 31:6

Aaron’s 18-year career in education began right here at Calvary Christian Academy. His wide-range of experience spans from the classroom as an Elementary and Secondary School teacher to various administrative roles including Director of Discipleship, Director of School Counseling, Director of Admissions, and Director of Fine Arts. Prior to becoming High School Principal, he served as Secondary Assistant Principal. Aaron holds a B.S. in Elementary Education from Taylor University as well as an M.A. in Organizational Leadership from Regent University. Aaron and his wife Katy, who is the Executive Director of Communications at Calvary Chapel Fort Lauderdale, have three children at CCA — Kaia (10th grade), Jamen (6th grade), and Halle (Pre-K4). Aaron has an affinity for the arts, sports, fishing, and fixing/building things!

Favorite Bible Verse:
“. . . being confident of this, that he who began a good work in you will carry it on to completion until the day of Christ Jesus.” –Philippians 1:6

Jason Rachels has served in Christian education for 25 years with 20 of those years being at Calvary Christian Academy. Jason’s roles at CCA have included Elementary Principal, High School Principal, and this is his sixth year serving as Head of School. Jason received his B.A. from Mercer University with a double-major in Greek and Sociology, he received his master’s degree in Religion and later his doctoral degree in Educational Leadership from Liberty University. Jason has been a part of Calvary Chapel Fort Lauderdale for 26 years, formerly leading the college and career group and teaching adult education classes. Jason has been married to Jennifer for 28 years, and they have three children: Willow (a junior at the University of Florida), Maya (a senior at CCA), and Remi (2nd grade at CCA).

Favorite Bible Verse:
"Now this is eternal life, that they may know you, the only true God, and Jesus Christ, whom you have sent." –John 17:3

Dawn has entered her new role as Elementary Principal with 23 years of experience in education. She has served at CCA for 15 years, initially as a first and third grade teacher, then on our academic advancement team, and most recently as Elementary Assistant Principal over Lower Elementary School (Kindergarten-2nd Grade). Dawn holds a B.A. in Child Study from St. Joseph’s College and an M.Ed. in Educational Leadership from Southeastern University. She is a natural school leader who can be counted on for significant whole-school responsibilities even beyond her elementary responsibilities. Her attention to detail, commitment to excellence, and love for people make her an obvious choice for Elementary Principal, and we are grateful to God that she will be filling this important role at CCA. Outside of CCA, Dawn enjoys exercising, watching football, and crafting. Her daughter Samantha recently moved to Atlanta to start a non-profit organization that serves youth who have been impacted by the Juvenile Justice System.

Favorite Bible Verse:
“And the peace of God, which transcends all understanding, will guard your hearts and your minds in Christ Jesus.” –Philippians 4:7

Joe began his journey in education right here at CCA 13 years ago as a high school math teacher. He then went on to serve as a Middle School Bible Teacher, the Secondary Dean of Students, Middle School Assistant Principal, Middle School Principal, and Finance Director. Joe holds a B.A. in Finance from Flagler College and an M.A. in Educational Leadership from Florida Atlantic University. He also serves as the Chairman for the Calvary Chapel Fort Lauderdale Mission Board of Advisors. His heart for missions and service led him to go on several international trips, including spending a year in South Sudan on a church rebuilding project with Samaritan's Purse. He encountered Christ in powerful ways during these trips, as have the 8th grade CCA students he has led during their mission trip to the Bahamas. Joe also enjoys watching and playing sports, studying financial markets, and spending time with Erika, his wife of eight years, and his two boys — Caleb (age 6) and Benjamin (age 4) — who both attend CCA.

Favorite Bible Verse:
“But none of these things move me; nor do I count my life dear to myself, so that I may finish my race with joy, and the ministry which I received from the Lord Jesus, to testify to the gospel of the grace of God.” –Acts 20:24

“COVID-19 may have slowed down much of our society, understandably so, but it won’t stop CCA from carrying out the work God has called us to do — reaching for excellence as we stand alongside parents to point their children closer and closer to Jesus through an unparalleled Christian education,” said Dr. Rachels.