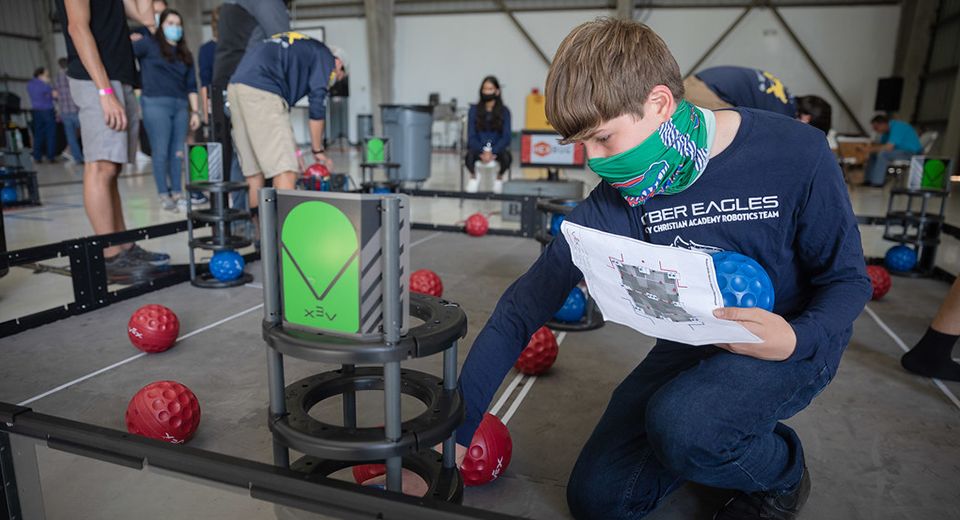 Paving the Way for “Project Lead the Way”

4/16/2021
By: Alyssa Mendez
In our tech-driven world, the demand for STEM-educated professionals is higher than ever. Learn how CCA has worked to meet this demand by being the only Florida school, among public and private schools, and one of the few in the country to offer all five of Project Lead the Way’s STEM education programs across Pre-K–12th grade. This advanced, college-preparatory curriculum is not only preparing CCA students to lead in the STEM field at the highest caliber, but to do so for Jesus’ glory.

While Silicon Valley is often associated with the tech industry, South Florida has recently made national headlines for its burgeoning tech scene, which is drawing tech professionals from around the country to this region for work. This tech and biotech boom has made the demand for skilled workers high. However, South Florida still has room for growth in terms of keeping up with this vigorous talent demand, according to the Sun Sentinel (Lyons, 2021).

Recruiting qualified employees from other regions of the U.S. may seem like the initial solution, but what if we thought bigger by looking to our younger generation to also meet this need?

Schools like Calvary Christian Academy (CCA) in Fort Lauderdale have recognized the importance of introducing STEM (Science, Technology, Engineering, Math) education to students at an early age and setting them up for a successful future.

In 2013, CCA began a partnership with the nonprofit organization Project Lead the Way (PLTW) to implement a STEM curriculum across its Pre-K, Elementary, Middle School, and High School divisions. This curriculum coupled with the biblical integration from CCA’s teachers prepares students to be 21st century, Christ-centered leaders in the thriving STEM field.

“A student who lacks a strong background in the STEM field will likely have difficulty achieving high levels of excellence in it in college and beyond,”

“A student who lacks a strong background in the STEM field will likely have difficulty achieving high levels of excellence in it in college and beyond,” said Mrs. Laura Quinn, CCA high school science teacher and administrator, STEM department head, and one of the visionaries who introduced PLTW to the school.

RESPONDING TO THE TECH INDUSTRY’S CRIES

Ten years ago, the U.S. tech industry was at a place where it was crying out for qualified workers, even more than it is now. Companies had to outsource work to other countries because homegrown talent was scarce.

A group of female STEM teachers and administrators at CCA, including Mrs. Quinn, heard their industry’s cries and believed that CCA was in a position to respond by equipping students with real-world skills in this area so they could confidently step into positions of influence one day at high levels of excellence.

“We saw an opportunity to execute our school’s mission of making disciples of Jesus Christ in one of the most influential, fastest-growing sectors in the world, one where many of its contributors reject God because they often view themselves as the Creator and science as a religion,” said Mrs. Quinn.

“We saw an opportunity to execute our school’s mission of making disciples of Jesus Christ in one of the most influential, fastest-growing sectors in the world

Although CCA offered programming and technology classes at the time, the school struggled with curriculum alignment, formal progression across grade levels, and an across-the-board implementation of project-based learning. But that wasn’t for long.

With administrative support, the group of CCA teachers and administrators attended the KC STEM Alliance conference in Kansas City, Missouri where they learned about PLTW in a workshop presentation led by the organization's president.

They were impressed to hear that PLTW consulted with top-level universities, industry leaders, and governmental entities to serve Pre-K–12th grade students by offering them a high-level curriculum that aligns with and builds upon the curriculum for already-existing core classes. In order to stay cutting edge, the PLTW curriculum is fully online and updated every year.

So, they got to work and began drafting a proposal to present to CCA’s leadership team — a proposal they called among themselves The Daniel Project.

“Daniel was one of those people who stepped into a non-biblical worldview culture in Babylon. He dedicated himself to do the very best in everything he could, and he became an influence to kings and rulers, and that’s exactly what we wanted for our kids at CCA,” said Mrs. Quinn.

CCA’s leadership team embraced the idea and gave their official stamp of approval for making a significant investment in the resources, staffing, and space needed to bring PLTW to life on campus. Once CCA educators began to witness that God’s favor was upon the school’s trailblazing efforts and that interest among the student body had exploded, CCA’s five-year rollout plan quickly became a two-year one.

Although other schools across the country have adopted the PLTW curriculum, CCA is the only school in the state of Florida, among both public and private schools, and one of the few in the country to offer all five of its programs, known as pathways. Each of these pathways are designed for every grade level and provide hands-on learning opportunities from Pre-K through senior year. PLTW’s research-supported approach empowers CCA students to discover and explore interests, imagine and design solutions to real-world challenges, and become independent, confident problem solvers.

SETTING CHILDREN UP FOR SUCCESS

Believe it or not, college-preparatory education can begin as early as those early childhood years. If you’re ready to set your child(ren) up for success and cultivate their potential in the STEM field, visit CCAEagles.org/Tour to get an up-close look at our campus, classrooms, and the Project Lead the Way curriculum in action.