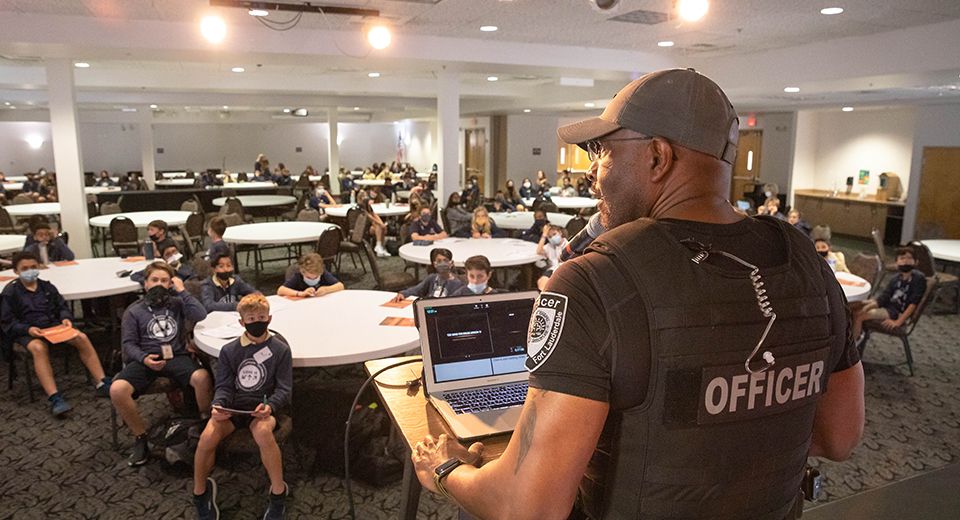 5/14/2021
By: Alyssa Mendez
Because children need safe spaces to unpack the “whys” of life, including the “why” behind just saying no to drugs, CCA introduced a new program this semester to sixth grade students called Too Good for Drugs. Officer Bill Ferrell, CCA’s beloved school resource officer who taught one of the program's sessions, shares advice to parents on how they can proactively prevent and recognize drug use in their children’s life.

Chances are you’re familiar with the phrase “Just Say No”. This anti-drug campaign launched in the '80s under the Reagan administration and eventually led to the creation of the D.A.R.E. program that was implemented in schools nationwide (History.com Editors, 2018). Though saying no to drugs is indeed a good thing for kids to do, the messaging presents an incomplete and surface-level narrative.

Children ultimately need safe spaces where they can process information, wrestle with questions, and unpack the “whys” of life

There is more to be said and done around the topic of drug and substance abuse prevention. Children ultimately need safe spaces where they can process information, wrestle with questions, and unpack the “whys” of life, including the “why” behind “just saying no.” Whether they realize it or not, parents were called to be that safe space for their children, teaching them in the same way Jesus taught during his ministry — in truth and in love.

“Train up a child in the way he should go, And when he is old he will not depart from it.” –Proverbs 22:6

Although it may be hard to believe, the average age teen in the U.S. experiments with drug use for the first time between ages 13 and 15 (Bracken, Rodolico, & Hill, 2013). For this reason, early intervention and education are essential. Now is the time to be encouraging students to refrain from the damaging influences that are posed by our culture.

For this reason, Calvary Christian Academy introduced a new interactive, evidence-based program this semester to sixth grade students — both on-campus and mobile learners — this school year titled Too Good for Drugs™. Middle School administrators plan to offer this program, created by the Mendez Foundation, to every sixth grade class at CCA annually.

From February 18 through May 13, this year’s sixth grade class met weekly to hear from qualified Christian speakers who engaged them in discussion on the topics listed below. Each student received a workbook that encouraged interactive involvement and reflection for each lesson.

“God has given us our bodies to share His Word, and by doing drugs we are hindering the chance to do so,” said Alyza Mack, a CCA sixth grade student who participated in this year’s inaugural program.

As you can see, the curriculum does not just educate students on the negative effects of drugs and alcohol, but also equips students with critical social-emotional skills coupled with spiritual truths so they are empowered to overcome such temptations.

Wisdom from a Police Officer/Parent

The final lesson on street drugs was taught by CCA’s beloved school resource officer, Officer Bill Ferrell, who has served the school for eight years and become a household name for many CCA families. Although he’s usually patrolling the property, ensuring the safety of our students and staff, every now and then he gets to make classroom appearances (and even video appearances!) to speak with students.

“I love taking on a teaching role because it builds relationships with the students, and that’s important as an SRO. You want to build that camaraderie and rapport with students so that when they see you, it’s not because there’s something bad going on; it’s because you’re the one who’s going to mentor and lead them or answer their questions,” said Officer Bill.

Because of the professional experience he gained during his 28-year career working as a patrol officer and administrator for the City of Fort Myers, Florida Highway Patrol, and Florida Atlantic University, Officer Bill has seen just how easy is it for teens to gain possession of dangerous drugs like cocaine, methamphetamine, heroine, and inhalants that can even be found in the average home. He described the accessibility to such substances as “high and alarming.”

While there are various factors that can lead to drug and alcohol use/addiction, Officer Bill credits early education and frequent communication as being key when it comes to parents leading their children through this societal crisis.

“The sooner parents start having these conversations with their children, the better. Fifth and sixth grades are good grades to start,” said Officer Bill.

The Power of Proactivity

As a parent himself, Officer Bill shared these four tips that will help other parents with school-aged children take on a proactive role when it comes to preventing and recognizing drug use in their children’s life:

At the end of the Too Good for Drugs session Officer Bill taught, a student he had never met approached him and asked if he could pray for her brother who was struggling in this area. He responded: “Absolutely.”

Prayer, grace, and compassion go further than we think with children. Although discipline has its place in parenting, compassionate and grace-filled discipleship will ultimately touch the hearts of the next generation and point them to the freedom that Christ freely offers.

“If you can pull one person away from the darkness, then that’s worth it.” –Officer Bill
Back
You can give your child the opportunity to shine socially in a safe environment at Calvary Christian Academy’s Summer Camp in Fort Lauderdale!