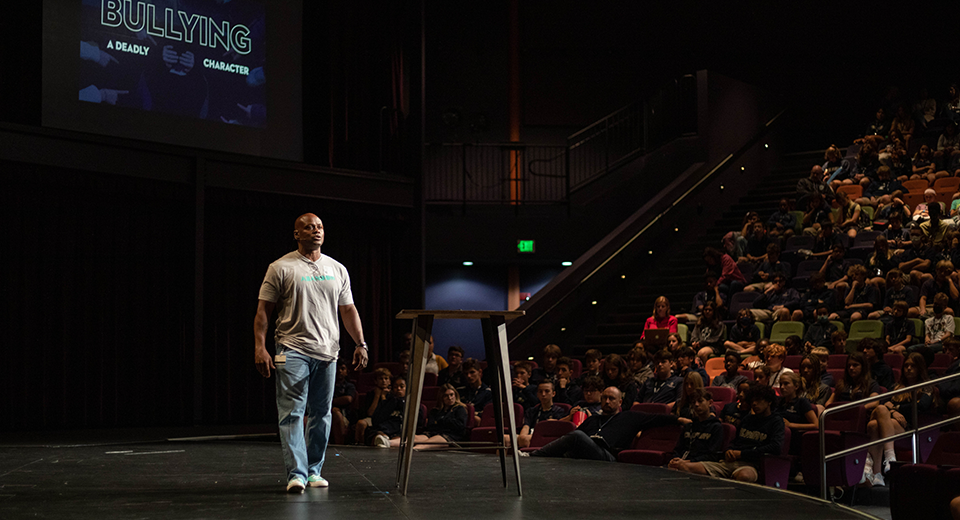 It Takes a Village: Addressing Bullying as a Community Issue

2/6/2022
By: Alyssa Mendez
With bullying being a wide-spread, worldwide issue, we have to stop and ask ourselves, “how did we get to this point as a society?” Retired correctional officer and CCA 7th grade small group leader Lester Johnson – who recently conducted a bullying assembly for CCA’s Middle School students – unpacks this question and offers parents practical insight based on his experiences and the truth of Scripture.

“We need to work hand in hand and conduct ourselves as a village and know that every problem around the village is a problem for everyone in the village.” – Lester Johnson

Head over to Google News and search the word “bullying”. You’ll see that the results entail endless accounts of not just students being bullied around the world, but also adults.

Bullying doesn’t always look like the burly child pushing a weaker one to the ground. Though it often manifests physically, it can also take the form of more subtle behavior that’s also emotionally damaging, like giving dirty looks, excluding others from the group, or posting hurtful content about someone online (otherwise known as cyberbullying). The list goes on.

According to Rosenkratz (2021), “roughly 1 in 5 children ages 12 to 18 are bullied in U.S. schools”, and “bullying is more prevalent in middle school than in high school, with almost 1 in 3 students reporting incidents in sixth grade.”

For this reason, Calvary Christian Academy (CCA) programs an annual Friendship Conference for fourth and fifth grade students before they start Middle School. During this day-long, off-campus event, students learn what bullying is and its detrimental effects, the key components that make up a healthy friendship, and what the Bible has to say about friendship.

Prevention and intervention are key

Though retired after 25 years of service with the Broward Sheriff's Office (BSO), God is using him in this season to actively invest in the Kingdom. He currently serves as a CCA small group leader for 7th grade boys, an elder at Calvary Chapel Fort Lauderdale, and in other positions of ministerial leadership. The title of Johnson’s presentation to 6th-8th grade students was “Bullying: A Deadly Character.” He didn’t sugarcoat the severity of the issue because he believes that adolescents need to know that such actions can lead someone to the point where they think that tragically ending their life is the only way to solve their problem.

“We need to admit that as a society we have dropped the ball. We need to fix this so it never happens again to anybody’s child,” Johnson passionately expressed, with tears welled up in his eyes.

Johnson’s history with bullying is both personal and professional.

“I was bullied in a bad way,” he said. As a 12 year old, Johnson had a gun pulled to his head by a 15 year old simply because the boy wanted to take away the video game he was playing.

Despite being a victim of bullying, the Lord redeemed his experiences and used those emotional scars to lead others and make a difference in his community. He served as a drill instructor for a BSO program that aimed to correct children who had continuous behavioral problems. In this role, he witnessed disturbing bullying situations on multiple occasions in the form of physical violence. But he also saw the fruit that this program and investment in these teenagers’ lives yielded.

“Parents expressed so much gratitude because we were able to influence their children to change in ways that they couldn’t,” Johnson said.

Guess what? You don’t have to be a drill instructor to have this kind of influence and prevent bullying in your community.

Johnson encourages parents and adults who work with young people to not grow weary in training up children in The Way they should go (Proverbs 22:6), especially from an early age when they are impressionable and their life’s foundation is being developed.

The more training you give, the less corrections you’ll need to give in the future.

“With my military background, I can tell you that training is not just one hour or one day, it’s continuous. The more training you give, the less corrections you’ll need to give in the future,” Johnson said. “Us parents can get caught up with paying bills, but we don't realize that we can end up with larger bills if we don’t interact with our children more.”

So what happens if you’ve been faithful to live out Proverbs 22:6 and find out your child has been exhibiting bullying behavior?

Johnson wants parents to first understand that bullying is an outward symptom of an inward heart problem. Bullies can act out for attention, due to insecurity/low self-esteem, because of issues at home, or for other reasons. They don’t know the proper way to seek help, so instead, they act out.

Though bullying is a heartbreaking reality, it should serve as a reminder of our sinful depravity and how we are all in need of a Savior to redeem us so we can live as children of light (1 Thessalonians 5:5).

“One of my favorite scriptures is John 13:35, which states that others will know we are Jesus’ disciples by the love we have for one another. You shouldn’t have to tell people you’re a Christ follower; they should know by your actions,” Johnson said.

Below are a few valuable resources on bullying prevention if you're interested in digging into this topic further, including some mentorship programs, which have been proven to improve behavioral outcomes and change the trajectory of a child’s future for the better.

Alyssa Mendez has served as the Content Specialist on CCA’s Communications team since 2019. She holds an M.S. in Leadership from Nova Southeastern University and a B.S. in Public Relations from the University of Florida. Alyssa attends Calvary Chapel Fort Lauderdale with her husband Mike.