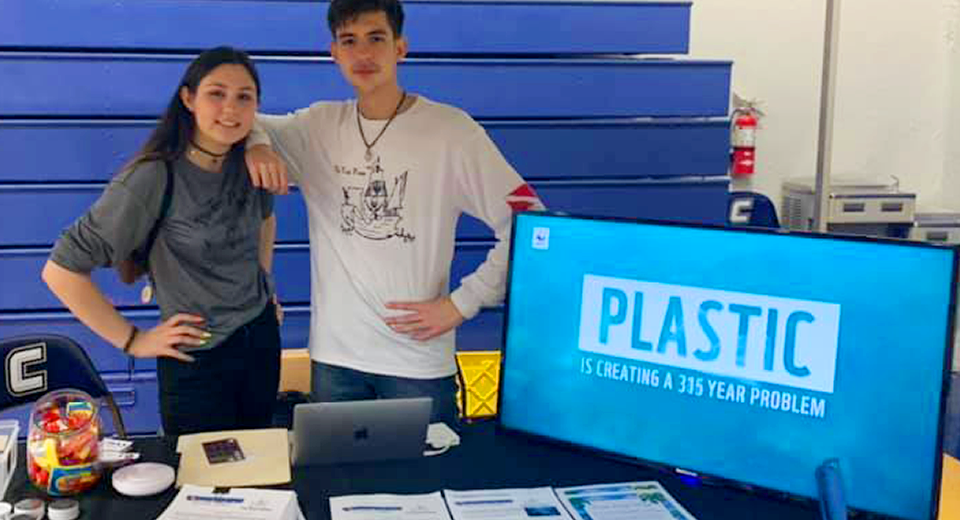 4/21/2022
By: Alyssa Mendez
On this Earth Day, we’re honoring a CCA family who has gone above and beyond to faithfully steward the ocean God has entrusted us with. Learn how The Trash Pirates are protecting South Florida’s treasured beaches and join them tonight at Dania Beach from 5:00-7:00 PM for their Earth Day beach clean-up!
They say that one man's trash is another man’s treasure. However, this principle doesn’t apply to the sandy shores where trash is problematic, and one brother-sister duo is doing something about it. Jorge and Caterina Hernandez, upperclassmen at Calvary Christian Academy, have been on a quest to protect their family’s beloved treasure – the Atlantic Ocean – from other people’s trash… close to 5,000 pounds of it.

“We are people of the sea. We really like to enjoy this amenity that God has given us,” said Jorge Hernandez, a senior involved in CCA’s STEM endorsement program with plans to study aerospace engineering at Purdue University. Despite having his sights set on the sky, he has them equally fixed on protecting our seas.

“Since our family has had so much exposure to the ocean, we’ve had a firsthand look of how bad the situation has gotten over the years and saw that it wasn’t getting any better,” Jorge added.

“We are people of the sea. We really like to enjoy this amenity that God has given us,”

During the lockdown of 2020, Jorge and Caterina – a junior skilled in art and animation – along with their father Nelson bonded closer as a family by brainstorming a solution that would preserve and restore South Florida’s beaches. That’s when the non-profit ocean conservation organization The Trash Pirates was founded.

They put their creative, engineering minds together to build a lawnmower-like machine that scoops up sand into a sifting mechanism, which filters out small debris fragments that are prone to breaking down into microplastics. Click here to see the machine in action!

Caterina has researched the effects of microplastics extensively and explained that though they may be small and oftentimes invisible to the human eye, microplastics can pose a significant health hazard to marine and human life (Thompson, 2018).

microplastics can pose a significant health hazard to marine and human life.

The Trash Pirates began their beach clean-up events during the pandemic when many gravitated to outdoor activities for greater safety. To date, they have hosted close to 20 clean-ups in partnership with the City of Dania Beach with individuals of all ages and backgrounds in attendance, including students seeking community service hours. With so many hands on (the pirate ship’s) deck, the trash bags can add up quickly, especially when a little friendly competition is involved, Jorge said.

Jorge and Caterina believe that God has entrusted the people of this earth to oversee and protect His creation in the same way Adam was entrusted to watch over the Garden of Eden (Genesis 2:15).

“We have a God-given responsibility to take care of the earth He’s given us, and that should not be taken lightly,”

“We have a God-given responsibility to take care of the earth He’s given us, and that should not be taken lightly,” Jorge said. “Lately we haven’t been doing a good job, but we can at least make a dent, and the idea is that over time, the expansion of this stewardship mindset will exponentially influence other people to help out for years to come.”

This past summer, Jorge and Caterina set out to instill this stewardship mindset by posting educational videos to YouTube and hosting pollution awareness summer camps in partnership with the City of Dania Beach.

“We want to teach the younger generation the importance of taking care of our beaches,” Caterina said. “They’re so smart and open to learning. They understand how important this issue is.”

Last year, Jorge was named one of 10 winners of the National Society of High School Scholars (NSHSS) Foundation’s Earth Day Award competition. This program recognizes high school students for their environmental stewardship, leadership, and volunteerism with a $500 cash prize. “It was a pleasant surprise to win,” Jorge said.

Jorge and Caterina have hopes of transitioning to completely mechanized beach clean-ups if they can one day mass produce it.

As a 2021 award winner, he was invited to serve as a panelist for NSHSS’ Earth Day Is Every Day virtual panel yesterday to promote environmental awareness on a national level. Jorge has also been named a Miami Herald Silver Knight nominee in the General Scholar category for his outstanding commitment to conservation and overall academic achievements.

Though they still consider their sand-sifting machine to be in a beta testing phase, Jorge and Caterina have hopes of transitioning to completely mechanized beach clean-ups if they can one day mass produce it.

If you’d like to experience a beach clean-up on Earth Day with The Trash Pirates, head on out with your family to Dania Beach (300 N Beach Rd) Friday, April 22, from 5:00–7:00 PM! There will be prizes, contests for kids, free T-shirts, and light refreshments; all clean-up materials will be provided. Click here for more details.

Alyssa Mendez has served as the Content Specialist on CCA’s Communications team since 2019. She holds an M.S. in Leadership from Nova Southeastern University and a B.S. in Public Relations from the University of Florida. Alyssa is a South Florida native and attends Calvary Chapel Fort Lauderdale with her husband Mike.