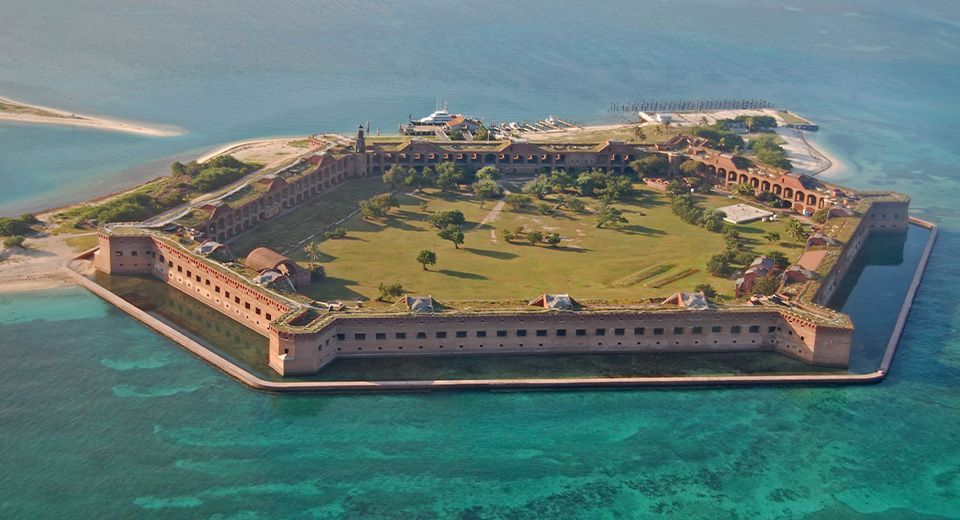 Beauty From Ashes: Life Lessons from the Historic Fort Jefferson

10/7/2022
By: Jan Lashbrook
Ever felt guilty wasting time, resources, and/or energy? Then you might relate to the history behind Fort Jefferson in the Dry Tortugas National Park. CCA’s Early Childhood Director Jan Lashbrook shares some spiritual insights she gathered on a recent family vacation and emphasizes the renewed purpose we can experience in Christ!
This past July, my family spent a day visiting Fort Jefferson in the Dry Tortugas National Park. Fort Jefferson sits on a beautiful, but remote sandy island about 70 miles west of Key West. Far from civilization, the Dry Tortugas have been an interesting and important piece of history since 1513, when Ponce de Leon first discovered the islands.

After the war of 1812, the United States realized it needed to fortify the Tortugas in order to improve its defense from a seaward attack, control navigation to the Gulf of Mexico, and protect Atlantic-bound Mississippi River trade. Construction of Fort Jefferson began in 1846 and continued for over 30 years. The fort contains over 16 million bricks, and its walls are over 8 feet thick, making it the largest brick building in the western hemisphere, covering 11 of the island’s 16 acres (pretty much the whole island).

During its peak, over 1,700 men were stationed at the fort. They were plagued with unrelenting heat, construction delays, shipwrecks, hurricanes, and Yellow Fever epidemics. Destructive storms over the years broke its seawall in half and cracked the rain-water cisterns, allowing salt water to penetrate into the precious drinking supply.

The invention of the rifled cannon finally made the fort obsolete, as its thick walls could now be penetrated. Despite the structure's enormity and the years of work that went into building it, the fort was never finished. It was used for a prison for a season, but the Army finally abandoned Fort Jefferson in 1874.

As our tour guide took us around the fort describing the decades of suffering, death, and destruction that had plagued the island, I was struck by the pure waste of it all – wasted time, money, ships, lives, and plans. What seemed like a good idea at the time had cost millions of dollars and many lives over the years, ending in an abandoned project.

Yet, the fort still stands strong and resilient in the middle of the sea, and the aqua blue waters around it are filled with beautiful coral reefs and interesting sea life enjoyed daily by snorkelers. Daily tours bring life back to the island. The fort has a renewed purpose. It now teaches us about our history, ourselves, and our resilience.

The fort has a renewed purpose.

The experience reminded me of the passage in Joel 2:25-27:

“So I will restore to you the years that the swarming locust has eaten, the crawling locust, the consuming locust, and the chewing locust, My great army which I sent among you. You shall eat in plenty and be satisfied, and praise the name of the Lord your God, Who has dealt wondrously with you; and My people shall never be put to shame. Then you shall know that I am in the midst of Israel: I am the Lord your God and there is no other. My people shall never be put to shame.”

When I think about the time and resources I have wasted over the years, including the time I’ve spent worrying and fretting about things that never happened, or the time spent regretting bad decisions, I am comforted by this promise of God. I do not need to live in fear or shame.

He restores the years we’ve wasted in foolishness and ignorance, and He makes beauty from ashes

He restores the years we’ve wasted in foolishness and ignorance, and He makes beauty from ashes (Isaiah 61:3). That is a beautiful picture of what Christ does for hurting people today. He is the giver of a joy that extends beyond the surface. He releases us from the bondage and sorrow that result from our foolish choices. He is the life-giver and the reason we live above our circumstances instead of under them. He is the Lord our God, and there is no other.

No matter what the circumstances of our past, He redeems and makes all things new when we trust Him as our Savior. We are a new creation and have a new life and a new purpose. We can rest in that promise!

No matter what the circumstances of our past, He redeems and makes all things new when we trust Him as our Savior.

“To console those who mourn in Zion, to give them beauty for ashes, the oil of joy for mourning, the garment of praise for the spirit of heaviness; that they may be called trees of righteousness, the planting of the Lord that He may be glorified.” – Isaiah 61:3

Jan Lashbrook is the director of Calvary Christian Academy’s Early Childhood program, overseeing our Pre-K and Preschool programs. Jan holds a Masters in Early Childhood Education from Liberty University. She and her husband are “empty-nesters,” having raised three children who are all grown and married. Their youngest, Shawn, attended CCA for 12 years, graduating in 2012.
Back
Date Posted
No comments have been posted