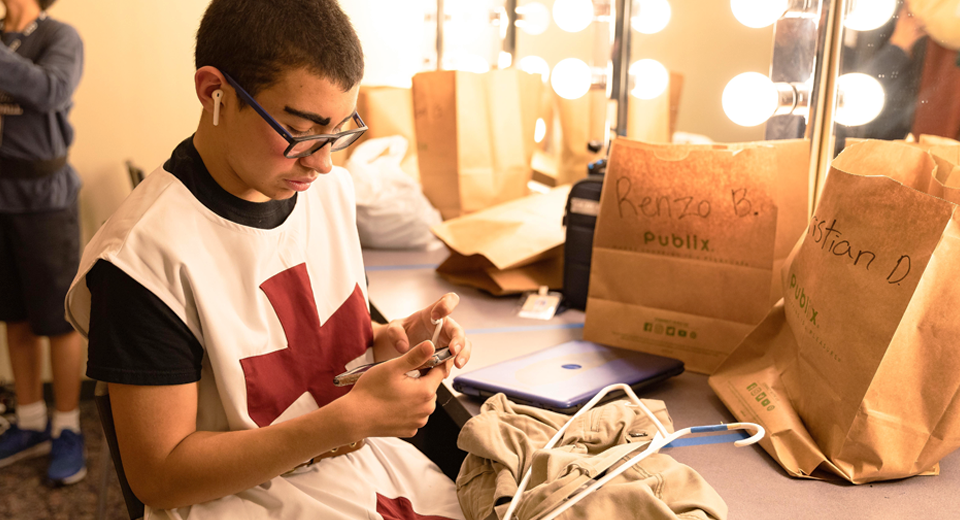 Acting with Autism: A Backstage Pass to a Theatre Student’s Transformation

4/2/2020
By: Lourdes Zarro
World Theatre Day and World Autism Awareness Day are only days apart from each other, and perhaps this isn’t a coincidence. We invite you to read the journey of how God used theatre in a powerful way in the life of a CCA middle school student diagnosed with autism.
Children and adults with autism are blessed with many gifts and have much to offer society. ABC’s TV show The Good Doctor is a great example of that. The main character, Shaun Murphy, plays an extremely gifted physician who sees solutions to patients’ medical problems that no other doctors can see. The show also depicts the challenges he has to overcome with communication, navigating relationships, and interpreting social cues.

Although we all have our weaknesses, unfortunately, individuals with autism are oftentimes bullied and overlooked by others because of their struggles with language and social skills. Seventh grade student Renzo Baez was no stranger to being misunderstood, but things took a turn for the better when he became part of the CCA family and decided to explore what the school’s fine arts program had to offer.

We believe every child is fearfully and wonderfully made by God.

Renzo — a student in CCA’s ESE program who has been diagnosed with autism — took a courageous step onto the stage of Calvary Theatre this past February when he made his acting debut as a cast member in CCA’s middle school musical Shrek The Musical JR. Playing the role of a guard in this production as well as his overall involvement in theatre at CCA presented him with a creative outlet to shine, grow, and feel a sense of belonging.

Theatre challenged Renzo to venture outside of his comfort zone by requiring him to speak and interact with others in a large group setting. The show rehearsals helped him practice social skills, as he had to collaborate with his peers, maintain eye contact, and recite his lines at the appropriate times. Learning the dance choreographies was Renzo’s favorite part of rehearsing.

Participating in theatre helps children feel included, creating a sense of worth.

His participation in Shrek The Musical JR. also led to newfound friendships, as the cast and crew members spent many hours together after school rehearsing and preparing for the show. The act of singing, dancing, and acting alongside one’s peers and uniting over a common interest naturally leads to kinship for all participants.

Additionally, participating in theatre helps children feel included, creating a sense of worth.

“CCA’s theatre program has boosted Renzo's self esteem and allowed him to develop a sense of independence and confidence that he wouldn’t have otherwise experienced,” said Myriam Ferreira, Renzo’s mother.

At CCA, we believe every child is fearfully and wonderfully made by God, and that He created them for a purpose. Our teachers are gifted with drawing out students’ unique passions and cultivating their God-given callings, which brings joy not only to our students, but also to the people whose hearts they touch.

Renzo looks forward to auditioning for the next middle school theatre production in 2020-21, and I look forward to seeing you there cheering him on along with the entire cast and crew!

“Each of you should use whatever gift you have received to serve others, as faithful stewards of God’s grace in its various forms.” –1 Peter 4:10

Lourdes Zarro is the Secondary ESE Coordinator at CCA and CEO of Sonfish Outdoor Adventure Program, a non-profit providing outdoor therapy for families living with disabilities. Having begun her career in 1989, Lourdes has over 30 years of experience helping families navigate the challenges associated with Attention Deficit Disorder, Learning Disabilities, Autism Spectrum Disorder, and Varying Exceptionalities. As a parent, she has experienced the joy and challenges that come with having a child with a learning disability. It is her professional goal to provide families with opportunities that stretch their child’s abilities and fulfill their emotional and social needs.
Back
Date Posted
No comments have been posted